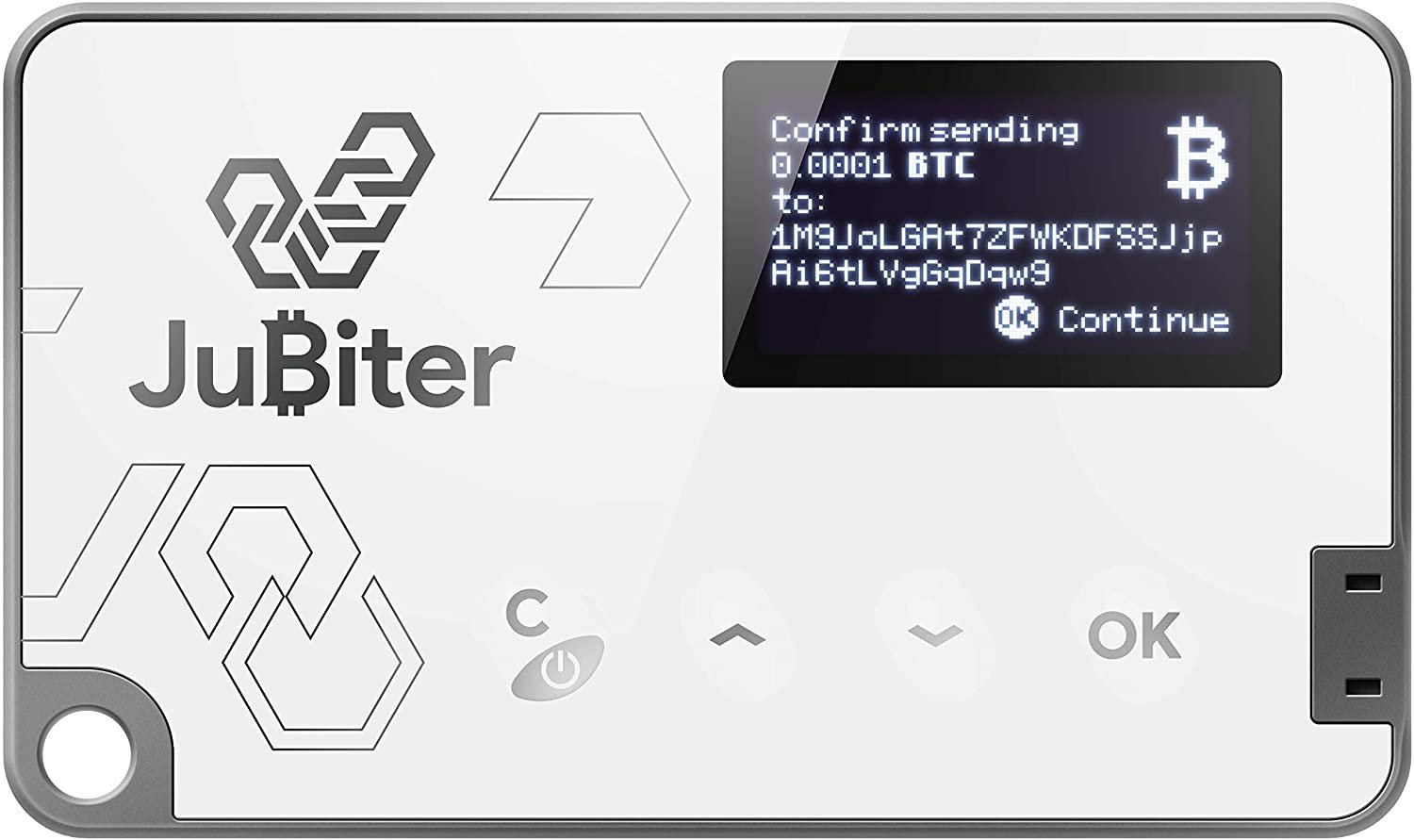 The popularity of cryptocurrency has caused a surge in new users seeking secure storage solutions. The Jubiter Blade hardware wallet is one such option, providing a level of security. Let’s look at some of the features and specifications of this device to see whether it’s worth your money!

The Jubiter Blade hardware wallet, a getting started card, two recovery sheets, and a micro USB cable are all included in the package. The Jubiter Blade gadget resembles a thin, metallic military tag with a thumb-sized display on the front and four buttons beneath it. An onlooker would mistake this for a piece of metal rather than something valuable. The Jubiter Blade includes Bluetooth support and relies on a USB connection for charging.

The screen is a monochrome black-and-white display with white lettering against a black background. Two buttons handle navigation; selecting an option is accomplished with the “OK” button. The “C” button is also the power button, which you would press and hold until the device turns on or off (the device powers on when connecting the USB cord to a computer but it stays powered on even after removing the connection).

The Jubiter Blade hardware wallet is relatively simple. Since the first one I purchased didn’t work, it may be delicate; Amazon was kind enough to replace it with another.

I connect the USB to the Jubiter Blade hardware wallet and my computer. Then I go to https://www.jubiterwallet.com/download.html instead of the URL given on the getting started card. Because there’s only a mobile app, I try the Google Play link first, but it’s no longer available. As a result, I go with the Android package link on the page. But that doesn’t work either. So I contacted support and waited for a response. However, after some research, I’ve discovered how to get the Jubiter Blade desktop app: (1) go to the download page and then hover over the android link; a QR code appears as your mouse hovers over the link, then (2) scan the QR code with your phone to access https://download.jubiterwallet.com.cn/. I click the appropriate link for my phone’s operating system and let it download to my phone.

I open the program on my phone, and here are two options: hardware wallet and software wallet. After choosing the hardware option, the app searches for my Jubiter Blade via Bluetooth after several confirmation screens. I couldn’t locate my hardware wallet at first. I unplugged the USB cable from my device and restarted it; then, the mobile app discovered my gadget.

Everything is a jumbled mess! The company’s manual should be updated with correct links, or at the very least, the company should establish website redirects. The process of downloading the mobile app is a significant time waster and may perplex novices. It might take many tries and device restarts to establish the Bluetooth connection. I received a response to my customer inquiry. A representative said I should use the Apple iOS app (because Google removed their Android app from the Google Store). The customer support response is just two sentences long.

The app has two functions: sending and receiving funds. To receive funds, go to the cryptocurrency tab in the app and select “receive” at the bottom. A QR code and a public address string will appear. You may scan the QR or copy/paste the public address. I follow the same procedure to start a transfer, but I tap “send” instead. After that, I fill out all of the pertinent information and then click “Next.” Then I’m asked to input my PIN on the mobile app using a random-numbered pin pad on my Jubiter Blade hardware wallet display as a guide. After that, the device displays my transaction information, and I press the “OK” button twice to confirm it. Then the transaction is completed.

You can access defi and NFT (OpenSea and Rarible) dapps if you switch to Ethereum in the mobile app. To interact with a dapp using the WalletConnect protocol, use the camera symbol on the app’s top-right corner.

The process is simple and secure as long as your seed phrase and PIN are secure. I can’t vouch for the software wallet component of the mobile app, which does not require the Jubiter Blade device for fund transfers.

The security features of the Jubiter Blade are comparable to those of other hardware wallets. A PIN protects it. There is no passphrase option; however, in my opinion, this does not make the hardware wallet any riskier to use (the Ledger Nano X lacks a passphrase function, but I consider that device safe). Regarding the mobile app, I don’t trust any software that’s not listed in an app store. I initially assumed a hardware wallet lacking an app store listing on Google Play might be fraudulent, but they have an Apple Store download accessible, so I am a bit more confident.

According to its website, the Jubiter Blade “contains a solid and reliable CC EAL6+ secure element.” I’m guessing this refers to the internal chip that generates random, encrypted private keys, but I’m not sure, and the product description isn’t definitive. Also, according to Jubiter’s Amazon product description, the hardware wallet may be used as a FIDO U2F authenticator, which I have not seen in the mobile app and have not tried.

I don’t know if this device is more secure than other wallets. I’d like to learn more about the security and encryption standards that the Jubiter Blade meets.

The Jubiter Blade hardware wallet supports only Bitcoin and Ethereum as of now. It does, however, support a variety of ERC-20 tokens.

I’m a fan of a no-frills, inconspicuous gadget, and you get your money’s worth for under $100, but it’s difficult to recommend this hardware wallet. For a wallet device costing around $75, the lack of coin support is expected. It allows you to interact with the Ethereum dapp ecosystem, which is a plus. That being said, I don’t recommend purchasing any device that severely restricts your coin options unless you’re a Bitcoin or Ethereum maximalist. I’m torn about suggesting this device as a less expensive alternative because the firm does not maintain its website. Broken links are all over the place, and their lukewarm reaction to my question makes me hesitant. This hardware wallet is a no-go for me; the difficulties aren’t worth overcoming.